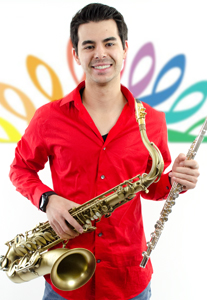 Mark Viavattine began playing the saxophone at the age of 9, with the encouragement of his parents (both professional musicians in the Rochester, NY area). Mark has had the pleasure of studying with many skilled saxophone teachers, primarily including Jose Encarnacion, Dr. Chien-Kwan Lin and his current teacher, Gary Keller. Mark has an extensive performance background in both classical and jazz styles and is proficient on all woodwind instruments, including flute.

In 2013, Mark received a dual Bachelor of Music degree in Saxophone Performance and Music Education from the Eastman School of Music (ESM). During his time at ESM, Mark participated in select ensembles such as the world renowned Eastman Wind Ensemble and the Eastman Saxophone Project, which has risen rapidly to international acclaim since its debut in 2010. Mark was also a member of the Obsidian Saxophone Quartet, Phoenix Saxophone Quartet, and the Eastman Jazz Lab Band. Mark has performed in master classes for notable saxophonists Carrie Koffman of the Hartt School of Music, Kenneth Tse of the University of Iowa, and Claude Delangle of the Paris Conservatory. He was selected as the sole recipient of the Rochester Area Buddy Carle Jazz Memorial Music Scholarship for 2010, and placed second in the 2010 and 2011 MTNA New York State Young Artist Woodwind Competition. He was awarded third prize in the Long Island Conservatory International Music Competition, and holds a Performer’s Certificate from the Eastman School of Music.

Mark is currently enrolled in graduate studies at the University of Miami Frost School of Music. There, he’s pursuing a Master’s Degree in Jazz Saxophone Performance.