To Brahms, with Love

From the Cello of Pablo Casals 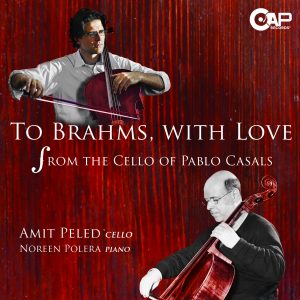 “Fiery and intelligent” – The Strad

CAP Records® recently released To Brahms, with Love: From the Cello of Pablo Casals, featuring Israeli-American cellist Amit Peled in Brahms’ Cello Sonatas Nos. 1 and 2, accompanied by pianist Noreen Polera. Peled can be heard performing on the 1733 Pablo Casals Goffriller cello, which was personally loaned to him by Maestro Casals’ widow, Mrs. Marta Casals Istomin. Casals performed Brahms’ F Major Sonata No. 2 for the composer himself, and recorded the Brahms Sonatas on the Goffriller cello in the 1930s.

To Brahms, with Love is particularly special to Peled because of his connection to the history of the cello and Casals himself. Casals passed away in 1973, and Peled was born that same year. Peled studied with lauded cellist Bernard Greenhouse, one of Casals’ most famous students. Peled was originally introduced to Marta Casals Istomin, when looking for a special cello to support his growing solo career. Mrs. Casals Istomin heard Peled play and offered him the use of the Matteo Goffriller masterpiece.

Peled effuses, “This is nothing short of a dream come true. I am humbled and honored to record my favorite composer’s cello sonatas — two of the most beautiful ever written — on an instrument that shaped the voice of the cello in the 20th century. Maestro Casals’ historic and monumental playing of Johannes Brahms’ Cello Sonatas was last recorded on the celebrated Goffriller. My hope is that this current recording, in a respectful and glorifying way, carries into the future the beauty of Brahms and the epic instrument and legacy of our cello Godfather Casals.”

Israeli cellist Amit Peled, a musician of profound artistry and charismatic stage presence, is acclaimed worldwide as one of the most exciting and virtuosic instrumentalists on the concert stage today. At 6’5″ tall, Peled started life as a basketball player and was called “larger than life” and “Jacqueline du Pré in a farmer’s body” when he enveloped his cello. Peled strives to break down the barriers of the concert hall, about which The Baltimore Sun wrote, “His amiable and inviting personality is exactly the type everyone says we’ll need more of if classical music is to survive.”

During the 2017-2018 season, Peled will continue to share the sound of Pablo Casals’ 1733 Goffriller cello with audiences around the globe. Upcoming highlights include Bach Suite cycles in the United States, Europe, and Israel; a new Naxos release with the Tempest Trio (Ilya Kaler, violin; Amit Peled, cello; Alon Goldstein, piano); a debut collaboration with the Peabody Chamber Orchestra with Maestra Marin Alsop; performances of the Shostakovich Cello Concerto and Penderecki’s Second Cello Concerto conducted by the legendary composer himself; Schubert’s Arpeggione Sonata recorded on the Casals cello; and a worldwide musical celebration of Beethoven’s Cello/Piano Sonatas to commemorate the composer’s 250th anniversary.

In September 2017, Peled published a children’s book, A Cello Named Pablo, written by Marni Fogelson and illustrated by Avi Katz. Funded by a successful Kickstarter campaign, it follows Peled’s journey from the basketball courts of rural Israel to the world’s great concert halls playing one of the most famous instruments of all time and continuing the legacy of Pablo Casals.

The Amit Peled Peabody Peled Cello Gang is composed of students from Peled’s studio at the Peabody Institute at Johns Hopkins University. The students range in age from undergraduate freshmen to second year master’s students, and the group comes together often to perform works written or arranged for cello ensemble. Peled and the Peabody Cello Gang also tour around the country, performing standard cello concerti with Peled as soloist and the Gang as orchestral accompaniment, as well as cello choir repertoire from the album and more. Peled and the Peabody Cello Gang released a cello ensemble album on CTM Classics in October 2017.

Peled has performed as a soloist with many of the world’s top orchestras and in major concert halls such as Carnegie Hall and Alice Tully Hall in New York, Salle Gaveau in Paris, Wigmore Hall in London, Konzerthaus in Berlin, and Tel Aviv’s Mann Auditorium. Of his enthusiastically received Alice Tully Hall concert debut performing the Hindemith Cello Concerto, The New York Times wrote that Peled produces a “glowing tone, a seductive timbre and an emotionally pointed approach to phrasing that made you want to hear him again.” His extensive discography includes critically acclaimed CDs on the Naxos, Centaur, and Delos Labels. His release Casals Homage, which features the legendary 1915 Pablo Casals program, topped the iTunes charts.

As an active chamber musician, Peled is a founding member of the famed Tempest Trio with pianist Alon Goldstein and violinist Ilya Kaler. Their Dvorak CD on Naxos has been described as “The best ‘Dumky’ on disk ever!” by Fanfare Magazine. Peled frequently performs and gives master classes at prestigious summer music festivals such as the Marlboro Music Festival, Newport Music Festival, Seattle Chamber Music Festival, Heifetz International Music Institute, Schleswig Holstein and Euro Arts Festivals in Germany, Gotland Festival in Sweden, Prussia Cove Festival in England, The Violoncello Forum in Spain, and Keshet Eilon Festival in Israel, among others.

Pianist Noreen Polera ranks among the most highly admired and sought-after collaborative artists performing today. Winner of the Accompanying Prize at the Eighth International Tchaikovsky Competition in Moscow, she has made numerous recordings and maintains a career that has taken her to every major American music center and abroad, including Europe, Russia, China, Japan, and Korea. In addition to Amit Peled, Ms. Polera has collaborated with cellists Narek Hakhnazarayan, Antonio Maneses, Matt Haimovitz, and Yo Yo Ma.

CAP Records is a grassroots label for unique recordings with adventurous artists of distinction. Its mission also provides after-school Community Arts Program (CAP) Conservatory for the Arts’ students with a platform for recording and the valuable growth that comes from listening. 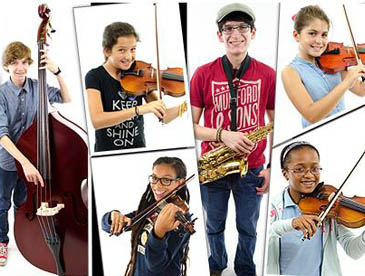 Your tax-deductible contribution is needed to support the Community Arts Program. With your donation, we continue to provide exceptional cultural and educational programming.