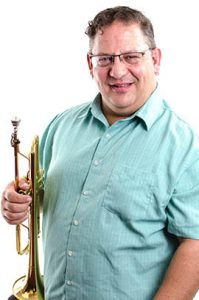 Jack is currently completing his DMA in Studio and Jazz Trumpet at the University of Miami Frost School of Music, where he is a Henri Mancini Fellow and Teaching Assistant. He received his Master’s degree in music from the University of North Texas, where he was lead trumpet in the Grammy-nominated One O’clock Lab band. He received a Bachelor’s degree in Business and Music at Elmhurst College. His teachers include Brian Lynch, Craig Morris, Don Jacoby, Arnold Jacobs, Doug Beach, Bobby Shew, Keith Johnson and Phil Snedecor. Jack has 25 CDs to his credit, as well as having performed with Barry Manilow, Gloria Estefan, Winona Judd, Diane Schurr, Doc Severinsen, Freddie Hubbard, and Joe Williams, among others.

Jack was the former first trumpet, soloist and clinician with the premier big band of the United States Army, The Jazz Ambassadors. Master Sergeant (retired) Jack Wengrosky toured 49 states and 15 countries over a 21-year career, and played well over 2,000 concerts and hundreds of high school and college clinics. While with the band, he made appearances with nine major symphonies—including Baltimore, Cincinnati, Detroit, Milwaukee, and the Boston Pops—and performed for the last six Presidents of the United States and the Queen of England. Jack also appeared in numerous TV and radio shows. In 2009, he performed with Jon Faddis and Herbie Hancock at the Kennedy Center Honors and two concerts at Carnegie Hall. As a freelance musician, Jack has appeared with cruise ship orchestras, Irving/Garland Symphony, Naples Philharmonic, Naples Philharmonic Jazz Orchestra, and on Barnhouse/Warner Brothers sample CDs.

Jack has been an instructor at Northwestern High School, Texas’ Frisco Independent School District, and Loyola Blakefield Academy. He has also been music director of the Music & Arts Big Band, and the enlisted bandleader (SGM) of the Maryland Defense Force Band. Jack is a Jupiter Band Instrument Artist/Clinician; he plays the 1600i, 1604 trumpets.