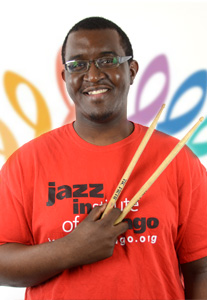 Michael Piolet, percussionist, is originally from Chicago, Illinois, where he attended Curie Metro High School and joined the Jazz Band under the direction of Tyrone Hines. In his last two years at Curie, Michael was chosen to be in the Thelonious Monk after school program in conjunction with Gallery 37 in downtown Chicago. There, Mike worked with such jazz legends as Herbie Hancock, Bobby Watkins, and Antonio Hart. During his last year of the program, he was chosen to be the drummer for the first ever Thelonious Monk’s All-Star sextet. In this sextet he had the opportunity to play with Antonio Hart at the Kodak Theatre in Hollywood, California.

Michael received his Bachelor of Music degree in Studio Music and Jazz Instrumental Performance from the University of Miami Frost School of Music. There, he was a Stamps Distinguished Ensemble Scholar and a member of the inaugural Stamps Jazz Quintet. The Stamps Jazz Quintet was chosen as the “Jazz Group” winner in DownBeat magazine’s 34th Annual Student Music Awards in the Undergraduate Outstanding College Performances category (2011). Along with other members of the Stamps Jazz Quintet, Michael received coaching from jazz greats Benny Golson, Dave Holland, Carl Allen, Brian Lynch, Terence Blanchard and Dave Douglas. They also performed with saxophonist Chris Potter, vibraphonist Gary Burton and the Matt Wilson Quartet. The group also performed with blues guitarist Buddy Guy at a private event.

As Michael’s career continues to mature, he regularly performs with local pros throughout South Florida. He often also returns to Chicago to perform..