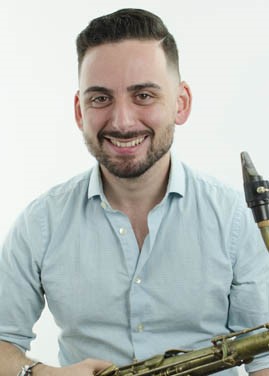 Manuel Echazabal is a saxophonist, woodwinds player, and composer. “Manny” completed his Bachelor’s degree at the University of Miami Frost School of Music, where he majored in Studio Music and Jazz Performance. While there he played in various school ensembles—including the Frost Concert Jazz Band directed by John Daversa—and shared the stage with such artists as Danilo Perez, Vince Mendoza, Maria Schneider, Dave Liebman, Monica Mancini, Arturo Sandoval, and Kevin Spacey, to name a few.

Manny is currently involved in many Miami projects, including his group: the “Manny Echazabal Group.” He recently recorded his debut album, released in 2017, which features his original compositions with Tal Cohen on piano, Dion Kerr IV on bass, and David Chiverton on Drums. Manuel has also been recognized for his work as a bandleader. His submission of two of his compositions, Unknown Identity and Spt, won him a Downbeat award for Outstanding Small Group Performance.