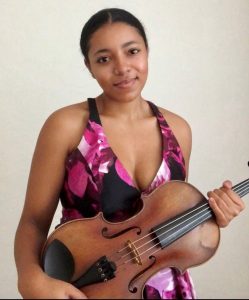 Alexandra D’Amico, violist, is a creative and committed performer from Boston. She is passionate about playing for diverse audiences in a variety of settings. Celebrated for her thoughtful musical ear, Ms. D’Amico has become a well-versed orchestral, solo, and chamber musician.

Ms. D’Amico has performed under the batons of Maestros Michael Tilson-Thomas, Gerard Schwarz, Marin Alsop, Edward Polochik, and Leon Fleisher. She has also performed alongside the most dynamic performers, who have included Yo-Yo Ma, Richard Troxell, Denyce Graves, and the Borromeo Quartet. She has concertized throughout the United states as soloist and chamber musician, and as a member of The Colour of Music Virtuosi. She has appeared on NPR’s From the Top, and has had solo performances featured on The Violin Channel.

In 2019, Ms. D’Amico joined the viola section in the Miami City Ballet Orchestra. In Miami, she has enjoyed wonderful performance experiences, such as being featured in the New World Symphony’s Viola Visions festival. For two summers, she has attended the Heifetz Institute in Staunton, VA.

Ms. D’Amico holds a Bachelor of Music from the Peabody Institute at Johns Hopkins University. There, she studied with Richard Field and Choong-Jin Chang. She is currently a student of Michael Klotz.